I studied technology because it’s not from the past, it can only move forward. For me, it’s a great source of hope. Through the many dreams we had in science fiction we expressed how much we hoped for technology. We dreamt of a smart robot companion that would be our friend and personal helper. We dreamt of smart technology.

Today, technology is living with us. From the smart phone to the camera we more and more carry a personal device with us. We are able to rely on technology more than we used to rely on people. We use it to replace our memory, to find our way, to get information, to communicate…it has become our personal helper as we dreamt it. GPS, the Internet, all our online communication tools, those are today’s personal helpers. Those are today’s smart machines. Yes, machines are digging, but they don’t look anything like robots, and they’re not evil. Instead they’re just smart software that we interact with. It’s only the beginning.

We don’t realize we’re already at the point where machines are intelligent because we expected intelligence to come in the form of robots with human-like behaviour, we still live by the science fiction vision. But if you look around the machines already do many things that remind us of the future we expect : they are replacing cash desks, public transportation, they help you find the best price, the best way, they help you take the best decision. Machines are intelligent, but one thing they miss so we perceive their intelligence is interaction with us. Today’s machines have very poor interactions with us, they are mostly functional and there is almost no notion of user experience in the way they are designed. Since experience is what we as humans value in our interactions, we don’t perceive machines as intelligent, yet.

My view is that the perceived intelligence of a machine stems from its UI. UI is the characteristic that lets un-tech people interact with technology on a high level layer. As technology applies more and more to all kinds of fields, UI becomes fundamental to make sure that humans know how to interact with machines intuitively to fix them or control their behavior.

When technology emerged, there was no interface. The interface is an evolution of technology, it makes technology useful and usable to you. We already reached the stage where we managed to make the machines functional thanks to the software layer, I think now is the time to make the machines expressive and personal by honing their UI. We could start by working on applications, it’s simple enough. Then we could invent new interfaces.

To achieve such goal of making technology “intuitive”, UI starts even before implementing anything and becomes an engineering principle : we tailor technology for our needs. While classic engineering is more about making technology functional, UI engineering has the goal of the interaction with the user, it integrates the user in the equation for building better systems. Every feature, every detail is guided by the idea that there is a user on the other end, there is us. In UI engineering, we build technology the way we want to use it. 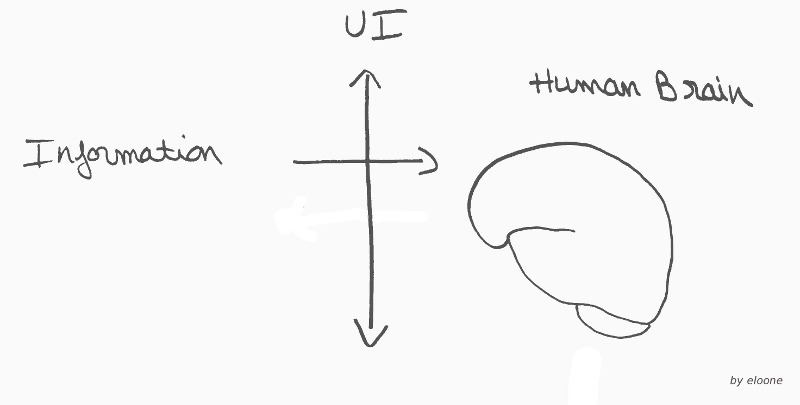 Then when the UI is interactive like in technology it becomes : 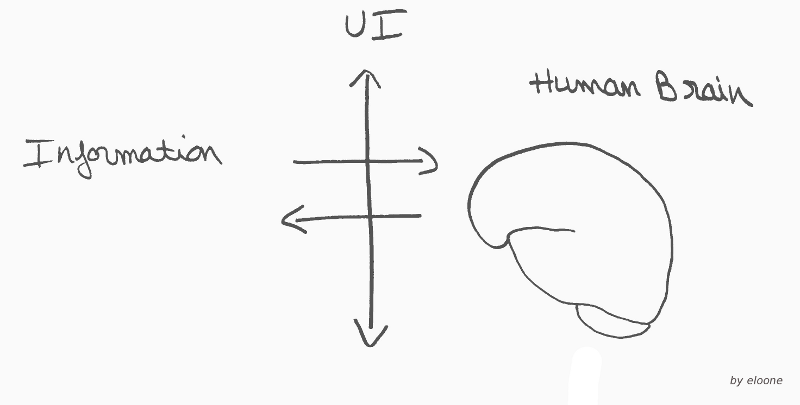 When the information is crucial, our understanding of it will determine our actions : 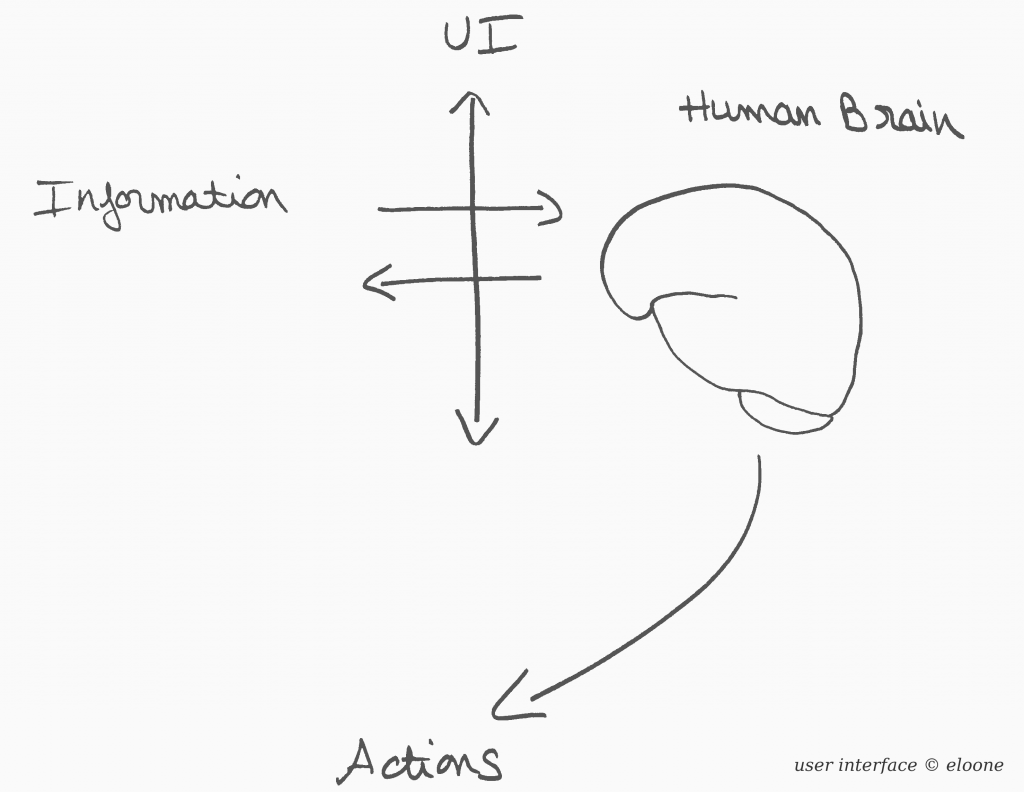 Then if we zoom in, in the context of technology : 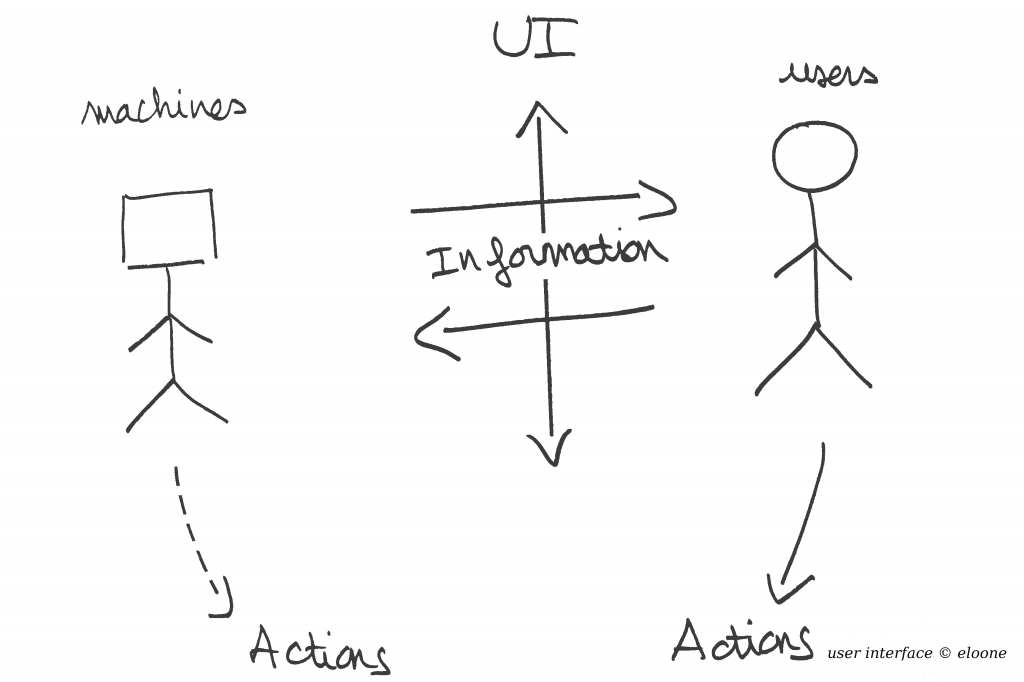 Technology is flexible, we can make it the way we want. Because it’s so flexible we often end up using it for services that just improve our comfort when it actually has the potential of changing lives. So what if we made it really useful ? As the data opens there is the hope that real relevant data is coming to feed services that will help everyone. There is also the hope that the data will be free for everyone to use.

There is always fear surrounding the rise of technology as if it was a threat for our freedom. But since humans create technology, they are responsible for its fate. We can’t control how a technology will be used, we will never control people’s intentions either good or evil, but we can influence how technology should be used with UI. The idea of UI engineering is to design technology the way we want to use it, it’s possible to design it responsibly as it moves forward, so let’s build technology to help us, not to format us. Let’s make helpers.