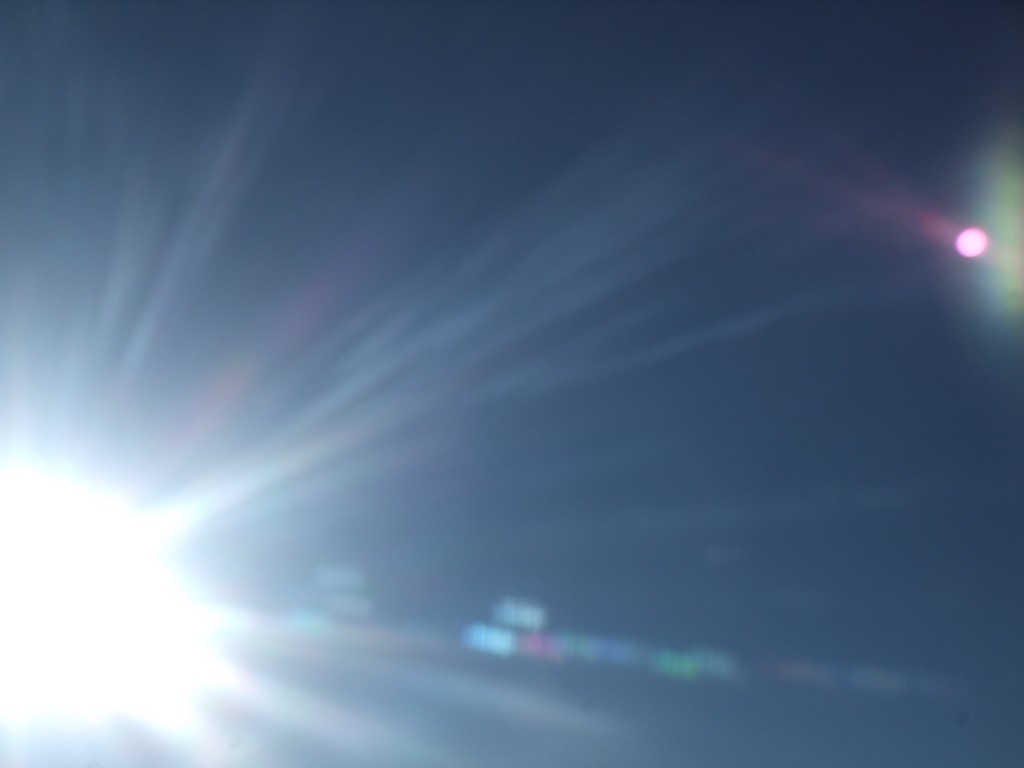 I was pretty satisfied of my logistics this time. We only got lost once. Because of the rain. It’s difficult to read a map under the rain. But otherwise with a guide and a map, you can do things. Of course, it demands energy: you spot a place, check the address, scan (mentally) the map, read and differentiate the Swedish streets names that all look like “Erggtëäkkkppääëllddötttkkggg-atan”, find the address and go there. It takes more than 15mn. And you do that for every place. You can’t filter according to location/interests/rates but there is no such thing that can do that, live life by risk and adventure. As for offline Gmaps, well, the search feature and directions are off in offline mode so I used it only once because I couldn’t zoom on my paper map. The test was pretty quick, without the search feature, I largely preferred my cute and colorful paper map to Gmaps. I missed an offline google translate or free dictionary though, that would have been so üüüssefüull. 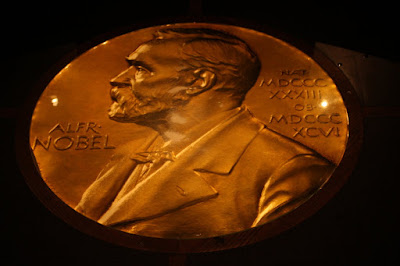 ow about my discoveries. I didn’t discover the Nobel prize, no. But I did discover its story at the Nobel museum. I knew there were 3 Nobel prizes: physics, peace and literature. And I always assumed there would also be: mathematics, obviously, with maybe culture and philosophy. But I was surprised there are 3 more, only: physiology/medicine, economics (?!) and chemistry. No mathematics…(!) Then I realized, no technology either… “the Nobel prize of technology”? … Well, you understand why when you know the story of the Nobel prize.

During his life, Alfred Nobel, a Swedish chemist, had made a fortune out of his several inventions, including dynamite, the most famous one. By the end of his life he was left with a giant fortune but no children. So he decided in his will to create the Nobel prize to use his fortune to reward each year individuals “who, during the preceding year, shall have conferred the greatest benefit on mankind”. The Nobel prize is the application of a chemist’s will dating back to 1895. By this date the telephone had already been marketed (1878) but its benefits on mankind were not yet widely accepted, and as an invention it didn’t belong to any particular field but it continued evolving to be later part of the field of technology. “Technology” was not a field at that time. So even if Alfred Nobel could have created a prize for “inventions”, he chose the major fields at the time that had a concrete impact on mankind.

As for mathematics, I think it’s not there because it’s not an empirical science. It’s very abstract, so rather than having a visible impact on mankind, its results are reused in empirical sciences that then have direct impact on mankind with inventions or discoveries. Like in physics. The Nobel prize rewards concrete results, and what has the best consequences for mankind. Yet, I think maths surely deserve a Nobel prize for theories like information theory for example.

Would technology deserve a dedicated Nobel prize today? “to reward the technology that has the greatest benefit on mankind”?

I think there would be a timescale problem because the technology that most benefited mankind last year could fall next year replaced by another technology. I read in the Nobel prize’s wikipedia page that the prize tended to reward discoveries rather than inventions and that it can reward an achievement after years when its impact on mankind becomes widely accepted. And I understand it since a discovery is a big achievement that will remain through time whereas an invention can be replaced by a better invention. Since technology is a world of always evolving inventions, not discoveries, the Nobel prize would look ridiculous if it rewarded “that technology from early 21st century that let people write messages but that doesn’t exist anymore because it became obsolete after a few years”. The rewarded technology would have to be revolutionary and “the one and only” that remains through time. But in technology it’s hardly the case. Once a concept or UI is invented, other similar services flourish. Should we reward the source of the concept, or the one that implements it best? Technology is such an always changing field that the Nobel prize would not keep up. Yet, it does have an impact on mankind. But since technology is always helpful (it’s created in response to a need), it always benefits mankind (in most cases), so I wonder how you could decide and declare a technology confers the greatest benefit on mankind, what needs to happen? Anyway, technology is still represented in the Nobel history with the invention that started it: 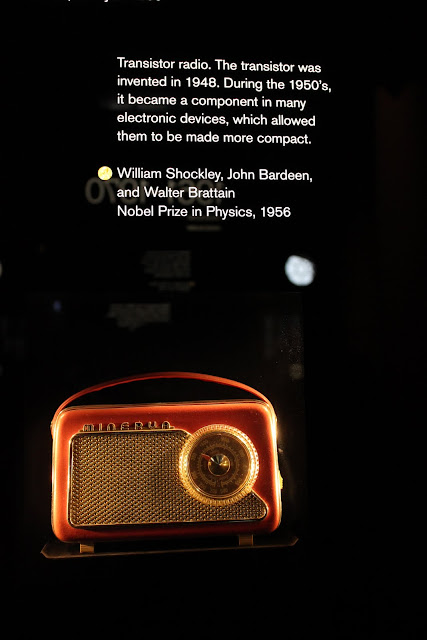 But in the end the only technology that would really deserve a Nobel prize, and that we could reward in advance is: the intelligent machine. Of course. Just for that, the Nobel prize should upgrade its policy and prepare a 7th prize for technology when the machine finally starts expressing itself spontaneously.

So I got all that information from the Nobel museum, my second discovery. I visited two interesting museums in Stockholm: the Nobel museum and the Modern art museum. I found them interesting because of their common feature: interactivity. I also visited the Skansen – world’s largest open air museum, and the Vasa museum. And even if I didn’t find the latter museums very interesting (=not relevant for my centers of interest) I was impressed by how the museums in Stockholm are very interactive sources of information.

The Skansen and Vasa museums did a great work at displaying the objects to make them look very realistic. The Skansen is an open air museum that shows everything that caracterizes Sweden. So it’s a sort of zoo, gathering the national animals such as the elk, the bears, the seals (and curiously also lemurs and monkeys, but that’s not very national). It’s also a museum that shows Sweden through time. So you see real arranged farms and houses from middle ages to 19th century. They really grew vegetables and reared animals in their farms, and there were real people in the houses and farms dressed like at the time and that could answer your questions or present you their activity. You could touch objects, enter in houses, talk to the people there. It was like visiting the past: 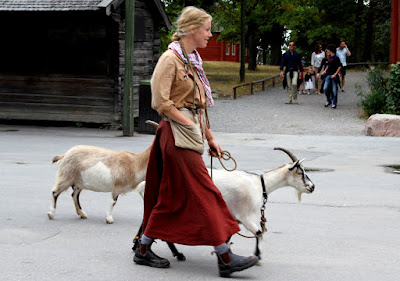 Swedish woman from the past 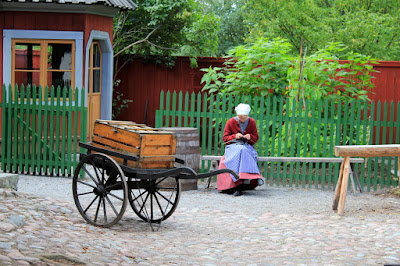 Another woman from the past. She was really sitting and knitting while visitors passed by.

The Vasa museum aimed at presenting the story of a war boat that was restored. So you could see the giant boat itself in the middle of the museum along with all its story in the form of videos/story of people on the boat etc. Unfortunately I was just not interested at all. 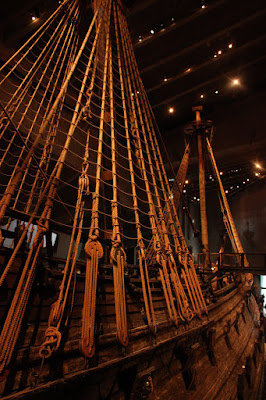 But what I really enjoyed was the Nobel museum and the Modern art museum because of this gadget: 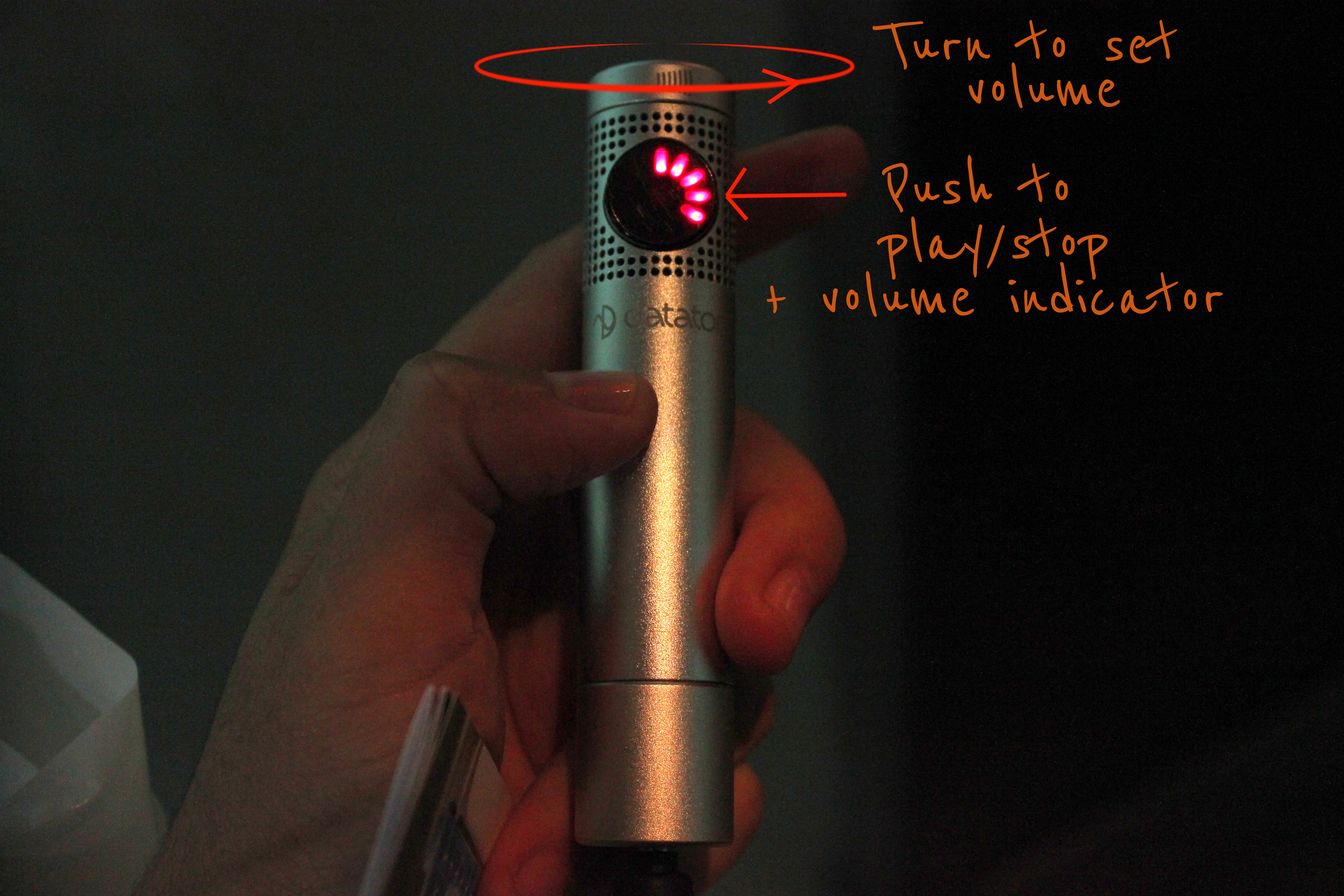 This was the technological highlight of my holidays. Do you know when you go to museums and the only thing you remember seeing is USO – Unidentified Still Objects? Usually you don’t retain any information. But they retained your money. Well, this time this gadget was worth my money. Basically that thing is an audio-guide. Wherever you see this: 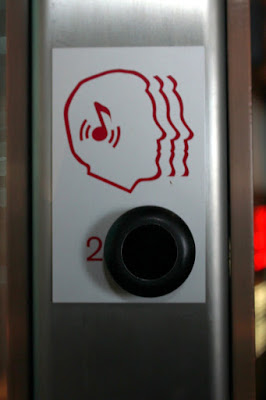 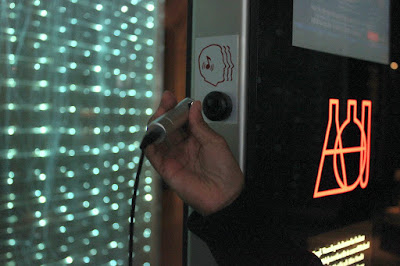 , you point the audio-guide to it and it gives you a detailed description and explanation of what you see. You don’t even need to point close to the laser anchor like on the picture, you can point from 1m distance too. Audio-guide is not ground breaking, but the way this one worked is. It was so easy and intuitive to use that it felt like I was clicking on real life objects. As easy as a click. It was like being in a real 3D web 5.0. See an object, point to it, and you know everything about it. That’s how I retained the information. The experience is totally different from reading a caption.

I’m really impressed by how the city made an effort to boost up the interactivity of its museums. In Paris, most museums I visited so far are everything but interactive, unfortunately they’re highly dull.

But it’s no accident that Sweden is advanced in the area of design and interactive experiences. Let’s remember that Sweden is the home of Ikea, Skype and Spotify. That can be explained by the “lagom” principle. I discovered this principle is the odd book “A xenophobe’s guide to the Swedes”. Odd and memorably funny. “Lagom” means “just enough” or “in moderation”, it’s a Swedish belief and value that makes Swedes live in moderation. They always do the necessary, not more, not less, they always opt for the optimum solution, they’re practical people. And when they say it’s “lagom” good, it means it’s the best. This explains why their design is so efficient and optimum, they trim any “bling-bling” feature, their solution is useful and it just works. They live by this principle.

I wanted to visit Sweden for many reasons, but mainly because I admired their advanced stage in many areas: design, technology, gender equality, welfare, ecology, way of thinking. I mean, I could really observe there the single dads in the streets with their 1,36 children. I learned that a parent has 15 months of parental leave, to take in a row or until the child is 8! Children have free healthcare! Students have a “student salary”, 35% free! Plus, Sweden is a pacifist welcoming country in love with nature.

What is that if not dreamland? I love Sweden.