Book review: The myths of innovation by Scott Berkun 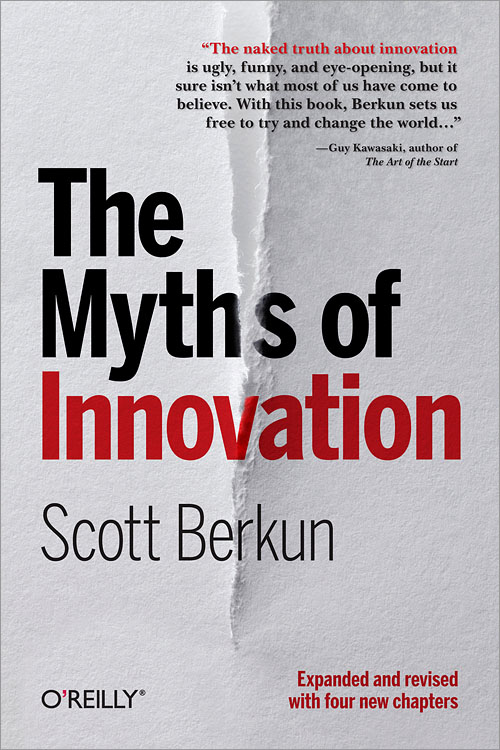 So I read this book “The myths of innovation” by Scott Berkun a few weeks ago, and I’m going to review it now to see what I learned from it.

As the title suggests, the book aims at clearing all the myths we usually believe in when it comes to innovation. The book is not a history book, so it doesn’t tell the story of innovations one by one to detail how they happened. It’s rather like a long blog article, with anecdotes about some innovations and interesting insights about what innovations imply, and how they happen realistically.

What I retained from the book is that innovations depend a lot on the context of a period, the innovator’s network and personality, historians, journalists…many factors external to the innovation itself. And when I say “innovation” I rather mean “credit for innovation”. Indeed, the book explains well that an innovation is the result of many endeavors of different people before it. The “innovation” happens at one moment when the final piece of the puzzle is placed. The credit is then given to the most influential person that was involved in the innovation and whose contribution was the most visible but not necessarily the most significant (what I call the bling-bling effect). From the moment an innovation is acknowledged, historians, journalists, the context decide how it’s going to be remembered. Most of the time an innovation is better remembered by its “little story”, hence the over simplified view we usually have of innovations. In reality, how an innovation happens is very complex, but the story tellers of the time often trim the little details to produce a cohesive story: “the simplifications make history easier to explain“.

-> A big part of what makes an innovation successful, is also about the communication around it, and the context: political influences, networks, influence etc. etc. It’s not fair but it’s the ‘game’.

I also retained that timing is really important for an innovation to be successful. An innovation needs to be culturally accepted and to require very little pre-knowledge from its early adopters. It shouldn’t ask users to completely change their way of doing things or even present a bold new concept, even if the concept is revolutionary, the users need to know where to start first. I think that explains a part of the google wave flop for example. Their technical implementation was impressive, but it was so ufo-like that we didn’t know how to use it. We had no pre-idea what a “wave” was and it required too much adjustment from users that it was easier to switch to something more understandable. This is very UI related: “Innovations do change societies, but they must first gain acceptance by aligning with existing values“.

-> An innovation needs to live in its time, it shouldn’t come from the future, instead it should gradually bring you there.

The book also describes what some pitfalls of innovations are, and how innovations happen in most cases. So some parts are very descriptive but not less interesting to read. The two points mentioned above were actually not very new for me, but reading the book confirmed what I already suspected. What was brand new and enlightening for me was this part:

This is an essential paradox of innovation: no one knows, not even the inventors, how their creations will impact the world until they are used.

Einstein’s theory of relativity revolutionized our understanding of the universe, but despite Einstein’s initial disapproval, led to the atomic bomb. From every wonder comes a horror, and no one can claim certainty over what future the pursuit of an innovation will create.

The lesson is that morality, or any philosophy, is invisible to the forces of innovation, and any innovator who takes his work seriously must operate with this in mind. What you do for good reasons may be used for bad, and what is done with bad motives can lead to good.

It’s a short part in the book and the author doesn’t insist much on it like he insisted on the previous points, but for me it’s the most important thing I retained from the book.

I was over thinking about how to make technology not harmful, but in the end the answer is that the consequences of an innovation are very unpredictable. The reason is you can’t control the intentions of the user. Finally I got it. We’re not in Minority Report. For example, an application can’t judge the intentions of a user before he uses it, and it can’t control his actions, it can just serve him. There is no such thing as an application that filters its users according to their intentions. The access is for everybody.

So we can’t stop a user from using badly a technology, we can just act on the consequences afterwards. It’s really difficult to design a technology for “pure goodness”. That will hardly ever exist as long as men have bad intentions in mind. Technology doesn’t control people’s beliefs and values. The only thing we can do at the moment is to hone the UI to suggest a “good” use, and ban “bad” use when we see it, but in the end the users are the ones responsible for their actions not the technology. Technology is morale free in its implementation. And right now injecting morale in it seems quite complex.

-> Technology rather becomes either “good” or “bad” depending on the consequences of its users’ actions. Users’ intentions/beliefs/values exist before technology and cannot be controlled. Purely “good” technology will hardly ever exists as long as men have bad intentions in mind.

Finally, the rest of the book is a good read, a good reference for facts about innovation. I think that it doesn’t contain anything fundamentally new for anyone who already started to create something – except for the hard history facts, but it provides interesting insights, and it’s great that a book highlights that creation is not easy, as it often seems after story tellers over simplify everything and turn it into a success story. There were really many good quotes accross the book, but the one that marked me the most was:

An inspirational touch to start the week!