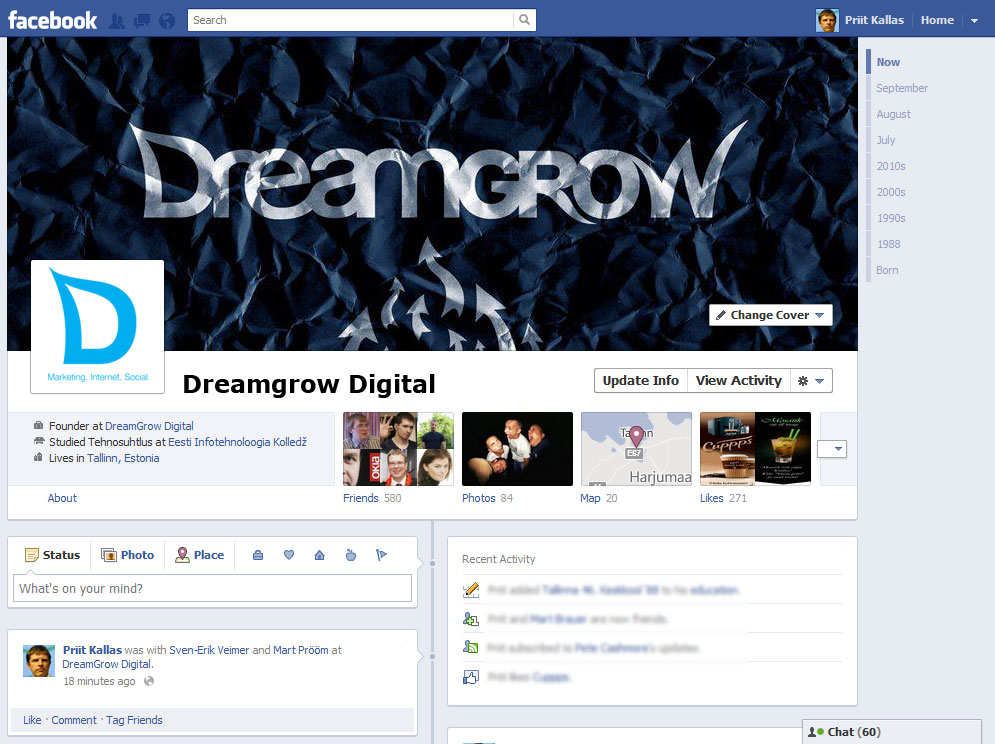 When younger generations get acquainted to the web, they will only see the Facebook side, that region of the web where they have their friends and their activities. Blogs, forums, etc. will only be something marginal, almost esoteric. The entry point will be Facebook. The Timeline feature is just another thing that encourages them to stay and keep populating their timeline, because if they don’t, the timeline will be empty, “what is going to be left of me? I have no life!“. The Timeline gives you a creepy feeling that your life is limited, and as you are growing old, you will see the end coming, how sweet. The most disturbing thing is the “born” mention at the beginning of the timeline as a silent “Hey, I want to manage your life from start to finish and I will”, spooky.

It’s getting clearer, Facebook wants to accompany you during all your life, from your birth to the last time you updated your status.  It’s creating a library of people.

A library of people

Imagine Facebook existed 50 years ago, and you are an art student. Wouldn’t that be great to navigate through Andy Warhol’s posts, statuses, private messages and timeline to really know who he was and know how he perceived life? Now imagine, you jump 50 years in the future. Wouldn’t that be great if people read through your private messages to really know who you were? What do you think is going to happen to your data once you are not there anymore to keep it alive? By default, it’s going to be public saved as an archive of who you were, because since you willingly gave your data to someone else you don’t really get to decide. Of course! Don’t pretend it’s a discovery.

Ok, it’s always better than to be forgotten forever (or maybe not). And since you’re not there anymore, why would or should you care? But honestly if the main reference to what you had to express during your life is Facebook, why would you let that be your reference at all! Wouldn’t you prefer to leave something of you a little more personal? Creative? With your very own thoughts and perspective? Something of your choice?

Even if the archive idea is relevant, and actually a good thing to document the future, for me it comes down to how you would like to be remembered. Do you really want the future to see your blabbing, or do you rather want to show the interesting things you had to share?

It’s not really FB’s fault, they just state “Hey! This is how we think the identity of a person can be represented, because that’s how we see it, here is our format, get in or don’t, but this is how you will be archived if you pick us”. There the problem is, who else to pick right ? We need time to figure out better and various models but it’s really annoying to be squeezed into another person’s vision of how your identity should be represented, it’s uncomfortable. When you get into a format, it’s rather difficult to share like you would want to share. Sharing is rather a creative process. I find it difficult to share your insights when the format is imposed on you. Personally when the format is imposed, I feel like sharing only normal, basic, flat and un-personal stuff. Right now, the only people capable of sharing the way they really want to share are more or less tech savvy people, and still, it’s not easy for them either, the rest uses Facebook. So they are doomed to share only a certain type of content, and that’s what they will be remembered for, unfortunately. So really there is no need to marvel in front of this new Timeline as if it was the only way to represent what you are, and your entire life (!!).

It’s not because someone built some magic box and told you to go in there that you should go there. I know it’s rather too much to suggest that people find their own way of representing their digital selves, but at least they should have more choices. Yes, the choices. This is a UI problem.