How people ruined my movie not technology 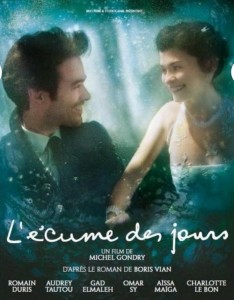 Have you heard about this movie l’écume des jours? I went to see it yesterday. You know it’s the very imaginative styled movie like Michel Gondry (Eternal Sunshine) loves doing. It reminded me of Brazil, but Brazil is still the best. Well, it’s the kind of movie that I love and that I looked forward to seeing ever since I knew it was coming out. So yesterday when we finally decided to see it, it was kind of a special night out. Unfortunately, 66 years ago, that small thing called “transistor” was invented and people thought they could stop doing their jobs.

We arrived in the theater 10 min before the beginning of the movie, we were on time. As we entered the room, we were flooded by the darkness and the silence in the room. Trying to find unoccupied seats, we almost sat on some people’s lap. When finally seated, we asked ourselves “Ok, what’s going on in here?” Power outage. Of course, what else? So we waited in the dark for a few minutes. Then we went complaining, and got the info that the movie would begin in 15 to 20 min. So we went back to our seats. The screen was black, and there was a background jazz music to alleviate the waiting. Well, why ô why did we believe them? The movie started 45 min later. But at least it started.

When the screen came to life, the lights were all on, and so was the background music, but no sound was coming from the screen. Is the movie beginning? Is this for real or what? We had no idea if that was the movie or just some movie trailers. Come on, they could never do something like that. Well, it was indeed for real. The movie had started without any sound, and the “waiting room” background music was still on. So the person in the front seat ran to tell the people outside that the movie was muted. And so after 5 min of the movie that we missed, the sound finally came through and the lights switched off. We could watch the movie. You would think that it was the end of it. Well…no. 5 min before the end of the movie, near the resolution, at the climax, when you are pure emotions, and you want to rescue the hero *** BAM *** no sound again. So that’s it, we watched the end of the movie with no sound. The sound came back right when the screen was displaying “the end”. Great job !

Now when I remember this movie, it will always be attached to this incident. It ruined the movie. The problem is not so much the power outage. Ok, it happens. The problem was the people not doing their jobs because they rely on technology so much. The job of projectionist is clearly dying, but I think it should have instead morphed into monitoring the technology that now does their previous job. I really missed having someone who actually cares about what the technology is doing and what he or she is showing. From what we saw, it seems that there was someone somewhere, pushing a play button (or it was probably all automatic) from a far away room, that would just not see what was going on in our room and didn’t care at all. At no point they came to inform us on what was going on. Clearly, it’s a people problem. As always, we still need people to monitor technology, where are the people?

Well, if you ever have the occasion of coming to Paris I suggest you strongly to NOT come to this movie theater, here is the address :