A good practice to use git in command line

I wish I could port my git settings from one computer to another. But how ? If only there was a guide I could follow for that. So I’ve decided to document it here so my future self can check it anytime.

Here are the settings I use for git.

By following this quick setup guide, you will be able to use GIT enhanced with features that help you visualize and understand what you’re doing. These are the settings I use and it works well and it’s very practical. It works on Ubuntu and Mac OS.

Take a look at all the nice features I just promised :

You will be able to autocomplete on branch names local and remote + on git commands. Woa. 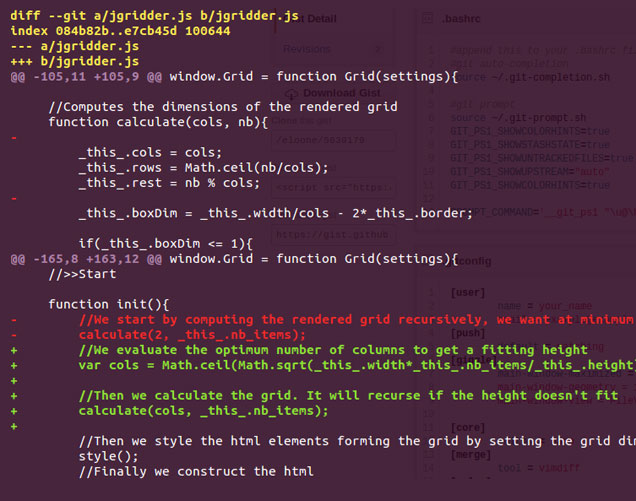 In next section, you’ll see that this is taken care of by .git-prompt.sh.

It colors the changes.

As you can see, the prompt is customized and you can see where you are and the name of the working branch.

Also taken care of by .git-prompt.sh.

So all these features exist to help you visualize better what you’re doing in git, it’s very handy. Honestly without these settings I find it difficult and rather dangerous to work with git because you just see nothing.

Here what you need to do to make this work :

> Download the script and save it in your home with the name .git-prompt.sh OR

> If you want to go really fast cd to your home and run this command :

curl https://raw.githubusercontent.com/git/git/master/contrib/completion/git-prompt.sh -so .git-prompt.sh
It will fetch the script directly and put it in your home directory.

This script will be used to customize your prompt.

> Download the script and save it to your home with the name .git-completion.sh OR

> In the same manner as before, if you want to go really fast cd to your home and run this command :

It will fetch the script directly and put it in your home directory.

This script will let you autocomplete on the branch names local and remote (once you fetched the changes), and on the git commands. Fantastic, I know.

Note :
Those links are for the bash shell. If you don’t use bash, simply browse the repository to find the right script for your shell.

#3 Now that you have those two files, you need to change the way your shell will look. You do this in your .bashrc file in your home. The changes to make are in the following snippet.

Note :
Depending on your system, the file used to customize the shell can be .bashrc, .bash_profile, or .profile. Just find out which file customizes your shell, and apply the same changes described here.For mac os, you will have to edit .profile in your home, and if it doesn’t exist, just create it.

#4 Once this is done, to get all the git colors simply edit your .gitconfig file in your home.

> To do #3 and #4 go to your home and edit the .bashrc and .gitconfig files like in these snippets (for .bashrc, only append those lines do NOT replace all the content with those lines):

And now normally, you’re done ! You’ve got all the nice effects mentioned earlier. If you don’t see the effects in your shell right away, try to relaunch your terminal.  You can enjoy GIT !

If you need to customize this further, or understand better what is going on, you can see it all documented on the github pages previously cited :

The lines added in .bashrc result from following the documentation for those scripts actually embedded right in the script comments.

As a bonus, I recommend you do this little game to strengthen your mind in GIT mastery. It’s really fun to use – finally someone managed to explain GIT with visuals, thank God (or Git ?) ! => http://pcottle.github.io/learnGitBranching/ (tip : if you’re stuck use the show solution command, the website doesn’t make it obvious I only discovered it at the end when I finally solved the levels)

If you have other nice features for git that sweeten the git workflow, please share with me !